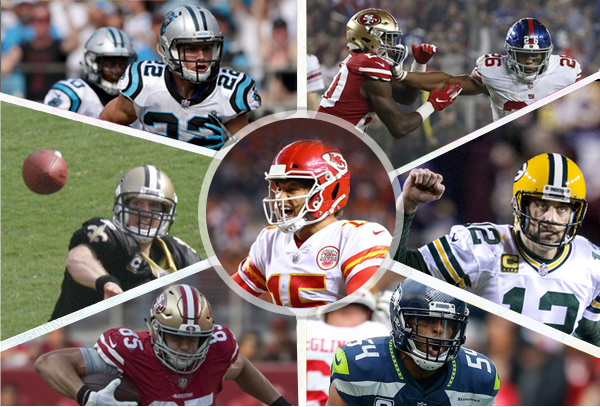 GET IN ON THE ACTION NOW!
News, Notes & Nonsense
The place where analysis, accolades and stories of the weird meet.

Thank you again for your patience this weekend!
I believe things will be back to normal this weekend...

PICKUPS
Since there is NO Thursday game, Pickups will be as follows:
RD 1: posted Friday at 1:00am EST
RD 2: posted Saturday at 1am EST
RD 3: posted Sunday at 1am EST

This will allow you to check out injuries for a couple of extra days...

Scoring:
If you see something that still does not look right, please let em know...

Thanks again and have a great week!

NE vs DEN cancled for Week 5

The NE vs DEN game has been CANCELED on Monday....

Both teams will use this week as their BYE week....

This game has been moved to NEXT Sunday....

Have a great Sunday!

KC vs NE has been moved

Reminder that trade can be done at ANYTIME prior to kickoff Sunday.

It will be played later this season.

I hope you have enjoyed the first 3 weeks of the season!
What a wild one we have had thus far!

Our first COVID incident...
We have the TEN-PIT game being postponed until Monday or Tuesday.

Please take extra care with your lineup this week making sure starters and backups are in the places you want them.

No word on the MIN-HOU game yet... no one has tested positive for MIN... fingers crossed.

No new pickups or IR spots as of yet...
If either game does not play this week, it will be treated as their Bye Week by the NFL.. they will be playing on their regularly schedule Bye Week so no games will be missed.
Our rosters are 33 deep (and 1-IR) so we do have a lot of room for moves to be made...  possibly some tough decisions to make but that is part of fantasy!

2020 is a crazy year and not everything is going to be completely fair this year...  unfortunately, that's the way 2020 is going to go...

Thanks for being patient and understanding through these unprecedented times!

I hope you and yours are very well!

All Unowned teams are open for trading so if you see something, let me know.

Thank for being a part of Mr. Sports
I appreciate you!

Have a fantastic day!

COVID UOPDATE
As you might have seen, TEN had 3 players test positive....  MIN has yet to have anyone test positive....
We will monitor this situation throughout the week but you might want to make plans accordingly for potentially players losing time.

08/08/20
Hard to believe that we are at the last day of preseason trading!!!
All Unowned Teams are open to deal
So if you see a match, send me a note and let's talk trade!!!
Trades are due in the system by 11:59pm EST tonight
I will process any last minute trades at that time
Cutdowns are due at midnight.
Cutdowns will be posted Sunday morning at 11am EST
TEAMS FOR SALE!!!
Still some excellent teams available.... check them out!!!
https://www.mrsports.com/football/teams-for-sale.cfm
Below you will see Defensive Position Changes
If you have a question about anyone else, let me know....  happy to take a look today.

Thank you for being a part of Mr. Sports!!!
Have a great Saturday!!
Happy Trading!

The winner gets $160 credit to their account (enough to buy TWO Teams for Sale or jump into a new keeper draft!) or choose $50 cash!

How it works:
Pick players 1-64 (1st 2 rounds for the draft)
Just pick a Player for the spot
For Example
1. Joe Burrow
2. Grant Delpit
3. Zach Baun
And so on and so on for the first 64 picks
What team selects the player does not matter
10pts for a correct pick
4pts for a pick that is within 1 spot

To Enter:
Send me an email with your picks: brian@mrsports.com
That's it, easy!!

Picks due to me by NOON EST on Thursday April 23rd

Let's have some fun on Thursday and Friday!!

04/21/20
Well, it happened.
Brady talked Gronk into coming out of retirement and joining him in Tampa!!!

Holy Cow....  looks like the Saints may have some serious competition!

Congrats to all of you for winning a title!
I can't wait for May to roll around and get this whole thing kicked off again!!

Enjoy the week and get your prep work done for Week 6!!

Team of the Week

Lamar Jackson lead the way with 30.48 points.
I am stil not sold on him but no one can argue about the great start to his season as QB1... Who would have guessed he would out-point Pat Mahomes over the first four weeks, 130 to 126?....  certainly not me!

Ray's stable of excellent RB's piled up 76.9 points....  Fournette, Gurley and McCaffrey are going to be a formidable bunch as the season progresses,

Congrats again, Ray....  excellent week and in the drivers seat at 4-0 in the division!

This one was probably a bigger game-changer than the NFC Champ Game, if that’s even possible....  completely changed the complexion of the game...  I swear, it’s like a bunch of Don Denkinger’s are out there when the Saints take the field....  if you don’t get that reference, YouTube Don D!

*Drew Brees: out 6 weeks...  has only missed 1 game because of injury since high school!

*Big Ben: out for the year... when was the last time you heard of a QB getting elbow surgery... answer: never...  See you in the HOF Ben!

*D. Williams: hurt his knee, but only EIGHT yards rushing before he left

*James Conner: The Terminator only had 11 yards on the ground but added a TD to salvage his day before leaving with a hurt knee....  looks like he is playing Week 3

*Gallup: solid game before injury... will be out 2-4 weeks

Step Your Game Up

*HOU offensive line....  it’s offensive alright...  8 games in a row that Watson has been sacked at least four times....  yes, FOUR times, EIGHT games in a row!!!... they are going to get him killed... maybe Larry Allen is available.

*Dolphins GM, Chris Grier...  this team is an embarrassment to the NFL and should be relegated to the XFL immediately...  please promote the Tampa Bay Vipers, sight unseen.... can’t be any worse than what is out on the field now

*Kirk “Not Kurt” Cousins...  is there really anything more to explain? … here is something for you to chew on: he is going to make $130M in career earnings by the end of 2020

I am honestly shocked at how awesome he has looked...  color me puzzled as to how well he is throwing the ball.... 39.22ppg with seven TD’s...  and more importantly, he is showing complete command of the offense....  kudos to you, Ozzie Newsome, for that talent eval and making moves to get him at pick #32 (standing up, applauding)

Get Out Your Pencils, it’s Math-Time!

Talk about four clunkers...  I’m pretty sure these guys cost you a win this week

What all should have been high-scoring games, all four were held in check

Put Out an ABP

*Dante Pettis: is he even playing?

Any piece of the KC offense on any given week could be a game-winner for you...  this week, the honor goes to Demarcus Robinson, the fourth-year player out of Florida.

He probably won’t have this many points combined the rest of the season but this week, he is a true, one hit wonder!

And....  in case you were wondering

Seven dogs covered the spread (six if you got Denver under +2.5)

Five of them won outright

Thanks for being a part of Mr. Sports!

I am so excited to welcome you all to the NEW Mr. Sports Fantasy Football Site!

Please explore!!!
This will be much easier for you to navigate on your device of choice: phone, tablet, laptop, desktop, mainframe, punch cards, whatever!

There will be new things added over the next few months to make your fantasy experience easier and more fun. I will keep this area updated with any new gadgets and widgets which are added, so please check back here regularly.

Speaking of this section, I am going to use this area for:

Also, If any of you have always wanted to write for a fantasy sports site, here is your chance. We will be starting an "Articles" section soon. This can be any of a variety of topics. So if you are smart, witty and can put three sentences together (I guess that just cut out 98% of us), let's talk!

I hope you enjoy the new site.
Any feedback, positive and/or improvement ideas, are always appreciated.

Thank you for being a part of Mr. Sports and if you are not involved yet, what are you waiting for?!?!

Thank you for joining the Mr. Sports community!

You already have a team in ! Clearly you meant a different team for sale.

You already have a spot in !. Clearly you meant a different league.

That team has already been sold.